Squeeze Play in Five Acts, a poem by James Green 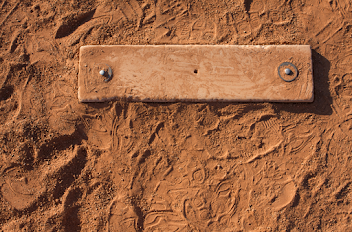 Squinting into lights through a cage,

the catcher tucks his fist into his crotch

to the pitcher, poker-faced, leaning-in,

hiding the ball behind his back,

turning it in his fingers to find the seams

he will command to enchant its flight, then

at the runner who teases a step at a time,

freezes on the balls of his feet, legs coiled,

to safety or dash into that soundless corridor

that points to home.

the pitcher points his cleats at the sky

and a fielder with his glove open-mouthed

begins to tiptoe toward the borderland

and the final act begins:

who will detect rotation, estimate rate,

speculate on trajectory, before reaching

to tap the ball softly as a pool shark,

the dénouement unfolding inside a script

the players write with