Letter from the Parking Lot, a poem by Joel Showalter 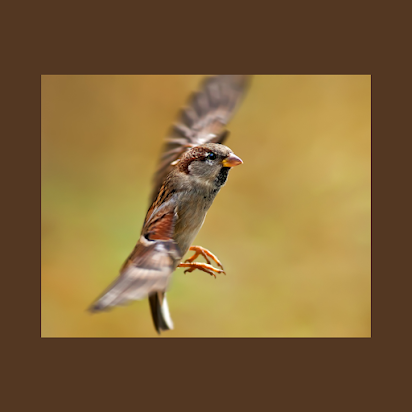 Letter from the Parking Lot

One of the sparrows

doesn’t see me until
I am too close, and he

startles, in a paroxysm

of feathers and gravel,

of his body skyward,

up and over my right

shoulder. And I too

mid-step, not by this

by a reflex that rises

in me, quick as any

creature’s: to reach up

and block the unseen

arc of this bird’s flight.

I find myself wishing

for a baseball mitt—

me, who hasn’t swung

a bat in twenty years,

who as a kid was always

sent to the outfield, where

I could do the least

the chance to pluck

this line drive out of

midair, not for some

no, this limbic impulse

feels deeper. Perhaps it is

that old, original urge: to

capture those who have

what we do not, to fix

the moth to the mounting

board, to hang the bear’s

head above the mantel,

to sear and swallow

the fish’s flesh, to steal

and steal again, and then

to lie about it,

as the geese weep

silently from our beds,

and the fireflies stare

in the arms of our own

seems only to grow.

Joel Showalter has spent his life in what other people call the Rust Belt: half in a small Indiana city, half in a major Ohio metropolis. The region’s varied landscapes, as well as its many inherent tensions, continue to influence his writing. His poems have appeared in The Carolina Quarterly, december, Delmarva Review, Mud Season Review, The Christian Century, and other publications around the country. In 2020, he received an Individual Excellence Award from the Ohio Arts Council.