Apprenticeship for the Walking Life, a poem by Doris Lynch 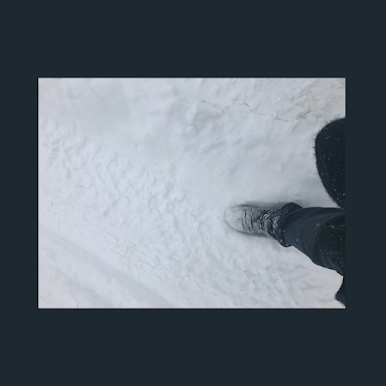 Apprenticeship for the Walking Life
For Kristen

Did you learn to love to hike

on those long tundra walks when I carried

you cocooned inside my parka, the one

We rambled over the frozen lagoon,

and then past the singing Wulik.

Together, we traversed the hummocky

Sometimes, I sang but mostly my Sorels

sawed through the snow, a sound similar

at two in the afternoon, a pale, ulu-shaped

was primarily sound then: ptarmigans hurdled

into flight, a snowy owl mewed being chained

the sea currents all the way from Siberia.

and once or twice a year, a pale aurora

hangs over our subdivision. Sometimes snow

floats down, sometimes moths bat against the light,

and in spring magnolias shed your favorite blossoms.

of your mountain college town,

as far from me as these stars that sketch

animal shapes across the night. Be comforted

for the stars although distant burn bright and this same

sky stretches over the arctic world, the world

you left behind before you realized you were

and Inupiaq. Before memory photographed

any of this for you: frazil, shuga, the aurora borealis,

before you realized we were two

separate beings going our own ways.

abu: an Inupiaq word for carrying a baby on your back inside a parka for warmth.

ulu: a short-handed knife now made from old saws used by the Inupiat to cut frozen meat or fish.


Doris Lynch has recent poems in Frogpond, Tipton Poetry Journal, Contemporary Haibun Online, and Modern Haiku and in several anthologies. Finishing Line Press published her chapbook Praising Invisible Birds in 2008, and the Indiana Arts Commission awarded her three individual artist’s grants, two for poetry and one for fiction. She has lived in places as diverse as an Inupiat village in arctic Alaska, Yogyakarta, Indonesia, New Orleans, LA, Berkeley, CA and, for nearly thirty years, in Bloomington, IN.