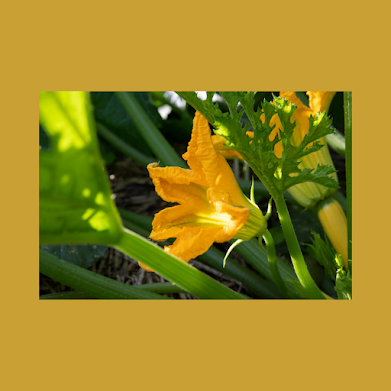 I lashed the bamboo tripod

for pole beans to crawl but

hijacked the mound then

When it sprouted five-pointed

year's jack-o-lantern for a

winter snack, and we started

through the garden over

tendrils creeping up the fence,

a green pyramid whose leaves

which in a day curl in

on themselves. A small

green ovule swells at their

petals until they are

brown flakes at the globe's

before our amazed eyes.

In the morning just yellow,

down the curves, and dreams

of pie turn to thoughts

in butter or baked side dishes

Eric Chiles, a graduate of I.U.'s graduate writing program and a former newspaper editor, is an adjunct professor of writing and journalism. He is the author of the chapbook "Caught in Between" (Desert Willow Press), and his poetry has appeared in such journals as The American Journal of Poetry, Blue Collar Review, Canary, Main Street Rag, Plainsongs, Rattle, Sport Literate, San Pedro River Review, Tar River Poetry, and Third Wednesday.