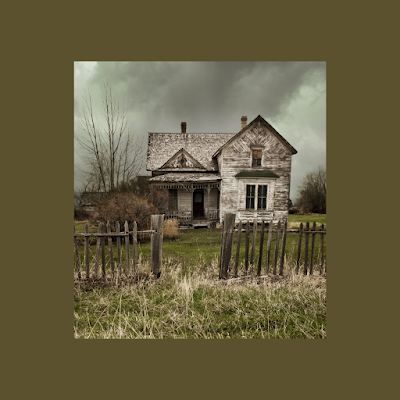 There is a screen door open and a strange sense of light that looks both warm and eerily green. Vines knit through the doorway and small seedlings grow in the floor and walls. The window was broken out a long time ago, and the punctures appear like stars within the glass. You can see the paneled wood floor and almost make out its lines—like it is also meant to tell you a story of past lives.

Uncle Larry, the youngest of the seven Michels’ kids, watches out for this house and the property around it. He doesn’t try to keep the house up to par but lets nature claim it, like the Navajo belief that old pottery shouldn’t be preserved but return to the clay particles from which it came. The house is a white farmhouse. It has exactly two stories. The second story is where the Michels’ kids lived, one big room. It is supposedly haunted from a boarder Great Grandma Michels’ once kept during the Depression. My grandma, the fourth oldest of the seven children, laughs at the stories. She claims that they are the fantasies of the overactive imagination of her younger siblings though she will admit that she, too, heard the stairs creak as if someone was walking up those stairs, “And then there was no one there,” she shrugs, “it was probably mice.”

My dad took this picture at our first reunion—of the screen door open with the strange sense of light coming through. He went with his cousins to see the old place like it was a pilgrimage. My oldest brother went, too. But I stayed behind and played with my third cousin, Sarah; we told ghost stories.

My dad tells me that the old tractor is still where my Great Grandpa Michels’ once left it. So heavy, it can’t be moved, now thick with rust. Almost everything else is gone from the old farmhouse. Almost everything worth taking, except the old mirror, and no one will take that. It is too frightening, like you’re afraid of whose eyes might be looking back at you.

It is 11 years since the first reunion, now our third Michels’ reunion. And I have decided that I am going to visit the old place. I am going to see the screen door open, those vines, and that strange light of the past. It is my time to see and be affected, first person, firsthand. It is my time to see where I came from and gather some sense of belonging—to share in the family narrative.

My dad tells me that he and I will go back to the old house together, father and daughter time. I will hear more stories as we walk in. I will go up to that second floor if the ladder-like stairs are still able to hold human weight, and I will see where that ghost resides. I want to trail my hands along the walls, never minding the splinters, and look at my face in that mirror that still hangs on the wall. To my dad, this place is always home; he dreams about it sometimes. And though the dreams aren’t frequent, they’re vivid.

My parents and I visit my grandparents only twice a year, and usually stay for a day and a half. As we drive on the highway near the country back roads my dad likes to travel, I always picture every abandoned house with faded paint and over-grown yard to be the Michels’ farm. Even when I see old faded red barns, which are obviously not houses, I picture them to be the old farmhouse.

“You were probably too young to remember.”

I hesitate before protesting and then recall the picture in my dad’s study. In it, my grandpa holds infant-me, only strong enough to hold up my head and the bonnet on it. I am dressed in Sunday-best shoes. My brothers and grandpa stand next to Great Grandpa Michels who leans his weight onto a cane. He has the big grin, showcasing the sense of humor that he was famous for, and my older brother, Aaron, looks up at him—as if Great Grandpa just said something funny. Aaron is barely ten and wears bell-bottoms, his hands in his pockets. Erich, already taller than everyone else, smiles a real smile at the camera. It is very green around us. There is a large clearing of land. Everyone in the photo is smiling except me, and I appear to be staring—in my own world before I had words to catalogue my thoughts into digestible bits.

That was the year after my brothers got their cats, Tiger and Lightning, from Great Grandpa’s farm: brother cats for the Frankland brothers. When my mom was pregnant with me, the cats slept on her impregnated stomach while I was growing and dreaming

“Sarah has been looking for you,” my brother, Erich, says. Sarah is now twenty and wears make-up and designer clothes. We haven’t talked for five years, but still seem connected.

“No one will do scary things with me but you,” she says, and I know once again that we will eventually tell ghost stories. She may want to go to the old cemetery as well, but I don’t think that there will be enough time, and I’d rather go to the house.

Grandma tells me how happy Great Grandma Michels would have been to see all of the family together. I talk to Aunt Jeannie, who can’t hear me, but still continues to nod like she is interested. We watch the young kids blowing bubbles in the yard. My nephew’s hair is so soaked with suds that my sister-in-law can fashion his thin hair to resemble Alfalfa’s.

I am afraid if I wait for my dad to stop chatting with his cousins, I will be missing out on another chance to see the farmhouse. He will decide not to go due to convenience or the setting sun. So when I hear that some of the family is going to the house, I rush to join them, figuring Dad and I can still see it later together. I climb in the backseat of my second cousin, Brad’s, four-door car. I travel with him and my four younger cousins. The house is not far from the church-like building our reunion is at. It is actually less than a mile away, and I’d be willing to walk, but my younger cousins don’t feel like walking in this heat. Brad tells tales about the haunted second story—how he and the other cousins slept on the second floor just so they could investigate.

“We were about your age, sixteen,” he addresses all of us cousins, and I realize that he has mistaken my age, as does everyone. I want to say, hey look at me, I’m twenty-one, I can buy beer, vote, go to R rated films without a hassle. But I don’t, I just listen and focus on the road. A farmer driving in his truck waves at us.

“Do you know him?” I ask my youngest cousin, Carolyn.

We turn down one road and soon onto a small drive by a cornfield.

“That field didn’t used to be here,” Brad says.

There is a bump in the driveway, and we ride weeds, which grab at our closed windows. The air conditioner is on. Great Grandma’s tiger lilies are over what used to be the yard. They are not tame, as when she watered them and weeded around the stems, spilling rust-like pollen on her callused palms. The tiger lilies in my yard back in Indiana are descendants of these ones.

I look up, expecting to see that open door with the strange light, and I see nothing. The house is gone.

My cousins, Lacey and Carolyn, explain to the rest of us how the place burnt down three months ago because of some bored teenagers using the abandoned house for their meth lab. They assumed we already knew and just wanted to go see what was left of the house like they did, to see what could be salvaged from this place of many stories, to see what the fire ate and what pieces it left behind.

Three months, I think, I missed seeing this house by only three months. Where was I three months ago? Was I studying? Was I drinking a Blond Russian at Seminary Pub with my friends, Kerry and Brynn?

The grass and weeds are tall. Because it is summer, there are chiggers, the little bugs that crawl under your skin and itch worse than any poison ivy does. I wear shorts, but think if I don’t stand still, if I hop, I will be moving too quickly for the little bugs to dig into me. I hop through the weeds to the foundation.

Brad walks around the house pointing out all of the used-to-be rooms to us. The foundation is so small, and I wonder how it could have supported all those stories. There are bits of porcelain left from what used to be the toilet. They look beautiful like limbs from a porcelain doll. My great grandparents’ old bedsprings and frame are all that’s left of their bed. “When you were lucky,” Brad says, “you got to sleep there.”

Carolyn points out the old well where Grandma threw one of Uncle Bud’s or Uncle Larry’s toys down when he called her, “Glenna Ghoul.” It is surrounded by weeds, and I look down, careful not to get too close. Is there still water down there?

There are nails and an old Coke bottle twisted and contorted from the heat of the fire.

“You can tell how hot the fire was by the way it transformed the bottle,” Brad says. My cousin, Stan, grabs it carefully. Despite the smooth appearance, even the curves have jagged edges. Brad takes the bolts that used to hold up the porch swing.

I choose to leave it all. I believe it all to be like pottery to the Navajos; it is better as dust. I wonder if the mirror melted or if it is hidden under the rumble. I picture it circular with an ivy pattern. What would it reflect if it could reflect at all? There is no second story, and I wonder where the ghost has gone now that is homeless. I look at the sky. It is empty.

Heather Dawn Frankland grew up in Muncie, Indiana. She holds an MFA and a MPH from New Mexico State University, and she received her BA from Knox College in Galesburg, IL. She was a Peace Corps and Peace Corps Response Volunteer in Peru and Panama. She has been published in Lingerpost, the New Purlieu Review, ROAR, Claudius Speaks, Sin Fronteras Press, and others. Heather has a deep- rooted passion for literature, advocacy, culture, feminism, and literature of place as well as displacement. She currently lives in Silver City, NM