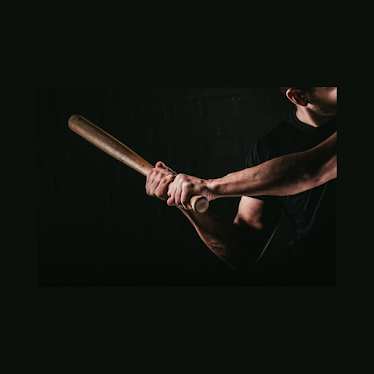 He's now aware of every crack

in the sidewalk of his game:

the bat's not cocked back too far,

the grip's not too tight,

stance not too tense —

after years in the minors

Still in the game,

he lately thinks, Just no good

in the box, he waits to pound

a ball out of the park.

When he swings, his eyes

wildly forward on its chain.

that's all he hears.

Sure enough, the ball squibbles

back toward the mound.

to run the play out.

As he looks up, his arms

Robert Manaster's poetry has appeared in numerous journals including Birmingham Poetry Review, Image, Maine Review, Into the Void, and Spillway. His co-translation of Ronny Someck's The Milk Underground was awarded the Cliff Becker Book Prize in Translation. He's also published poetry book reviews in such publications as Rattle, Colorado Review, and Massachusetts Review.