Today, I faced my white privilege in the mirror for the first time.

Today, I decided I didn’t want to be the silent spectator in the history books, the one who had to live with the guilt of watching injustices happening but holding her tongue, who shook her head in sadness at humanity’s lack of empathy but was too afraid to fight for change. Throughout my school career, I’d always wondered what I would have done during the darkest times of our history. Would I have been brave enough to speak out? Now, the pages are being written before my eyes. Change is happening, and this is my chance to finally know the answer to that question.

Today, I attended my first protest. I’ve yearned to protest issues in the past, but my courage always failed me, because in this America I’ve come to know, mass shootings are so normalized that I barely blink at yet another headline. It’s a cycle of “thoughts and prayers” followed almost immediately by a case of amnesia for anyone who wasn’t directly impacted by the tragedy. I have always been terrified of standing in a crowd of like-minded people conveniently clustered for maximum damage if a radical with an opposing viewpoint decided to make a statement in blood rather than words. I was afraid of leaving this world as nothing more than a statistic in the next forgotten headline.

But today, I’m reaching for the bravery to take that chance. It’s hot outside, and I don’t know what to wear. I’ll put two face masks on—this is a pandemic, after all—and stay on the outer fringe of the crowd. Safer to breathe the air. Less chance of contracting the virus. Less chance of being in the line of fire.

Today, I realized I’m more afraid of a rogue gunman than I am of the police, and I suppose this threat priority is a glimpse at my white privilege. After all, I’ve never had any reason to be afraid of the police. I’ve never been arrested. I’ve always kept my head down and done my utmost to stay out of trouble, and I assumed that alone was what spared me. The few times I’ve been pulled over, I remained calm and respectful. I turned my interior light on in the car if it was nighttime, and I set both hands on the wheel so the officer could clearly see I wasn’t reaching for a weapon as he approached. I knew that at the end of the day, he just wanted to go home, and so did I. It never occurred to me that the color of my skin may have been a factor that let me drive away with a warning each time. When the news would air yet another story of a Black man being beaten and subdued, sometimes even killed, I would automatically rationalize, He must have been rude or threatening. He must have not put his hands on the wheel. There must be more to the story. He must have done something to warrant the beating. But I’ve come to realize there isn’t more to the story.  Compliant behavior didn’t spare others who had a complexion or background that varied from mine, and that is why today, I am cutting a cardboard box and writing Black Lives Matter on it in Sharpie.

Today, it’s hot outside, and I still don’t know what to wear. My first choice for footwear, given the heat on this sunny and humid June afternoon, is sandals, but I don’t have any that strap securely to my feet, and I may have to run if there’s gunfire, or tear gas, or a riot. I’ve never before had to consider that factor when deciding on a pair of shoes. This isn’t a completely novel feeling—I am a woman, after all, and in this America I’ve come to know, I have to be conscious of where I’m going, what I’m wearing, and whether or not I’ll be by myself. I know to park under a streetlight in case it’s dark when I return to my car. I know not to be distracted or look down at my phone when I’m walking alone. I know to be vigilant and remain aware of my surroundings. I also know that none of those actions guarantee my safety. 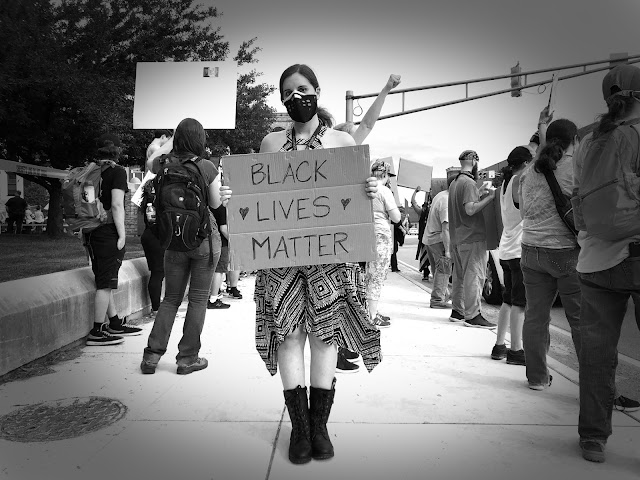 Today, I stared at my pale, wide-eyed, terrified face in the mirror, and I understood that any protection my skin may have afforded me, even without my knowledge or awareness, was about to be cast off. I would be discarding the shield I’d never realized I was carrying. I would not be a white American; I would be a face in a crowd of many colors challenging the establishment by chanting for reform and justice. I would be shedding my skin to join a collective united by beliefs rather than race. Being white wouldn’t spare me from a bullet fired by a police officer or white supremacist. Not today.

Today, despite the heat, I chose a pair of combat boots instead of sandals and mentally prepared myself to run or react in a split second if chaos were to erupt. My palms were moist, and my clammy fingers fumbled with the laces. My heart was beating so fast it seemed to flit like a hummingbird in its rib-bone cage. I was afraid in a way I’d never been before.

Today, I stared at the slip-on sandals by the door, and I realized this small, insignificant act—choosing a pair of shoes for the day—was a privilege I didn’t realize I had. I’ve never before had to think, Are these shoes practical? Can I run away from danger if I need to? Privilege, I realized, is putting on a pair of shoes without taking a second thought to ponder how fast you can run in them.

Today, I faced my white privilege in the mirror for the first time, and I decided which side of history I wanted to stand on when future generations read about America’s unrest in 2020. Today, I attended my first protest, and the eye-opening experience forever changed my life.

Sara A. Noë is an award-winning author, photographer, and artist from La Porte, Indiana. She has published two novels, the first of which received the Literary Titan Gold Book Award, and had her writing featured in a variety of anthologies and literary journals since 2005. Her poetry has recently been accepted into the Indiana Poetry Archives.